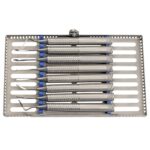 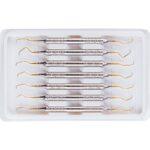 Extend the flap up to 3 cm very softly & easily without periosteal incision!

The Concept: The concept of the Soft Brushing technique is to softly disrupt the organization of the collagen fibers of the fibrous periosteum so they can be displaced apically off the bone exposing the roots and bone. The Brushes in the kit reduce the stiffness of the fibers that permits the flap to be reflected and released only by using the Brushes.

There are 2 methods of brushing: Soft and slightly aggressive. When you are moving Apical to coronal you use the soft method. When you are moving coronal to apical, the brushing action is used with slightly more aggressive pushing, applying more pressure to the fibers. This is used for example when the periodontal tissue has been scarred.

The Technique: The brushing is done after a full thickness flap elevation. The brushing can only be used after a full thickness flap has been elevated. The flap should be as deep as possible. Pull the flap up and downward with forceps and start brushing with the small size (regular or angulated for a posterior area). The movement is very precise. The brush is applied against the periosteum and a circular motion is used to displace the fibers.

After the first release, you can use the medium or XL for larger flaps.

Additional Tips: The flap releases rapidly and easily. You can retract and release as much as 1cm at a time. Sometimes the fibers may offer more resistance and it will take a little bit more time. Keep brushing until the fibers are displaced adequately and the flap is released adequately. For the lingual flap, it is very easy to gently separate the mylohyoid muscle just by brushing. It is possible also to brush the periosteum of the lingual flap. After brushing, you can check the periosteum and you will find that it has not been damaged.